Herringbone Fabric and Its History As Our Clothing!

Herringbone is one of the oldest and highly favored fabric weaving patterns still used today for making clothing and fashion accessories.

This diagonal pattern is very distinctive and a great choice for home sewists making suits, outerwear, and other garments with a home sewing machine like the Janome DC1018.

What Is Herringbone Pattern Fabric?

Herringbone is a fabric weaving pattern made using a special diagonal weave that is actually a version of the twill weave.

Twill is a diagonal pattern produced by weaving all the threads in the same direction.

Herringbone, which has also been called a broken twill weave, is basically a twill weave done with the diagonals going in two directions to produce rows of a V-shaped pattern.

It looks similar to the chevron pattern except herringbone is broken at the top where the lines overlap themselves.

The Origins of the Herringbone Pattern

Herringbone is named because the design was said to look like the bones of the herring fish and was invented long before it was ever turned into the fabric pattern that many sewists enjoy using for many project created on sewing machines.

In fact, it was first recognized as a pattern apart from its fabric usage during the days of the Roman Empire.

The pattern was actually developed as a means of laying bricks for roads in such a way that the bricks could expand and contract without breaking as the dirt under and around them did.

Ongoing Usage of the Herringbone Pattern

Eventually, the design made its way into the fabrics being produced in Italy during this era and its use grew from there.

More recently, herringbone twill was also used by the U.S. Army as the fabric pattern for some summer uniforms and combat fatigues during WWII.

Called HBTs for short, these uniforms were made from green cotton twill so they were cool and lightweight, though this fabric was only used to make fatigues and uniforms for a short time before it was replaced by more suitable fabric.

Herringbone is a subtle pattern that will look sharp if you use it the right way in the projects you sew with your Janome DC1018.

It is most commonly used to make formal suits for both men and women, a trend that started not surprisingly in Italy.

Known for making some of the best suits in the world, Italian tailors first used herringbone fabric made from wool, then cotton, and eventually other fibers as the pattern became more popular.

Now, herringbone is used everywhere and by many designers in their production of high-end, luxury suits, slacks, skirts, and other clothing and accessories.

Herringbone is a great fabric pattern to use with your sewing machine if you want to make professional-looking business clothing or other higher-end garments that look like they came right out of a fashion boutique.

Available in many fabric types, it’s an attractive fabric weaving pattern that will look great no matter what you decide to sew with your Janome DC1018! 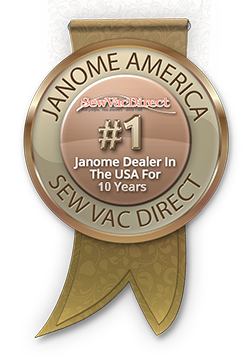